Welcome to Tasmania and welcome to the top Arctic tip of tease – where the skies are clear, the air is more than crisp and the performers make the cinders from an open flame seem timid! 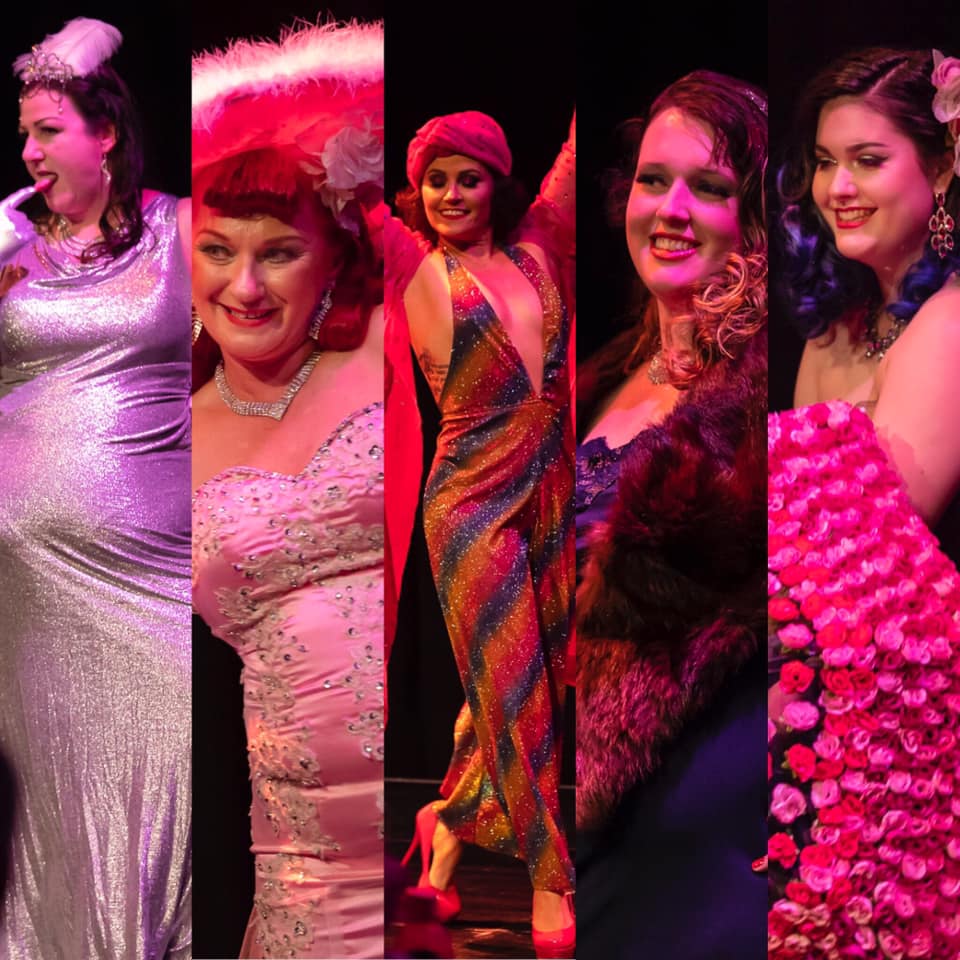 The Miss Burlesque Tasmania lineup for 2019.

Saturday the 29th of June at the Moonah Arts Centre was abuzz with friends, family, and eager fans, ready to witness Miss Burlesque Tasmania. The crowds bustled in and wine was poured into their cups. The room vibrated with both hushed whispers, or loud exclamations of people guessing who the winner would be! Who would it be? Which local performer would take home the crown, the sash, the legend, and fly to Perth for the Grand Final of Miss Burlesque Australia. 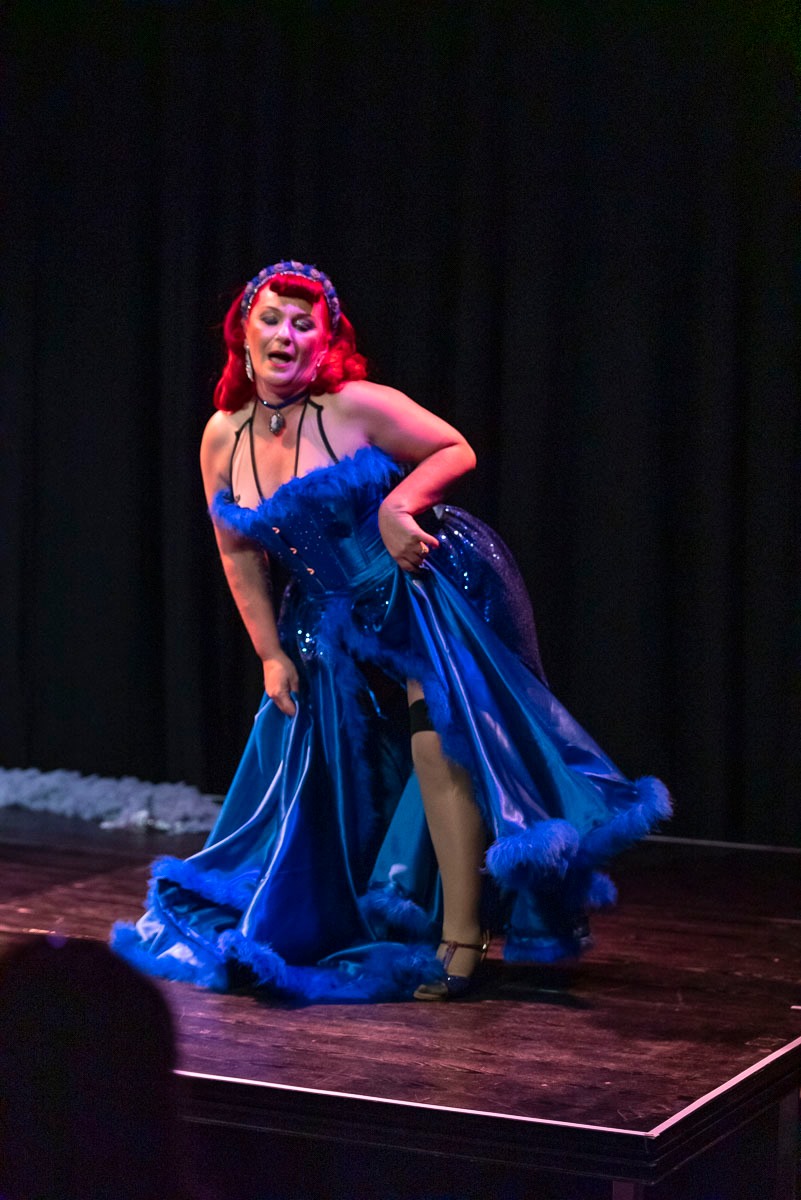 Vermillion Rose in the Traditional Section. Photo by Neil Buonaccorsi.

The buzz was lively, especially so for this new era for Miss Burlesque Tasmania, after legendary Hobart neo-burlesque royalty, Grace Cherry took over as the State Producer. The line-up, a smorgasbord of Tasmania’s titillating finest, Groovy Luschious, Monya Lisa, Miss Jessy G, Vermillion Rose and Shaan Valentine all ready to take to the stage and strut, strip, pose and parade for the crown. But who would it be?

Groovy Lushious, strutted in a silver gown with a knock-out Mae West styling, and all the silver screen sex symbol shoulder rolls of a silver screened voluptuous cougar. She was cheeky and flirty throughout her performances.

Monya Lisa indulged in her elegance, ruminating in the traditional section with all the classical stylings of an oil painting, before bursting onto the stage with her unique act, a flurrying hurricane of pink feathers and sparkles! 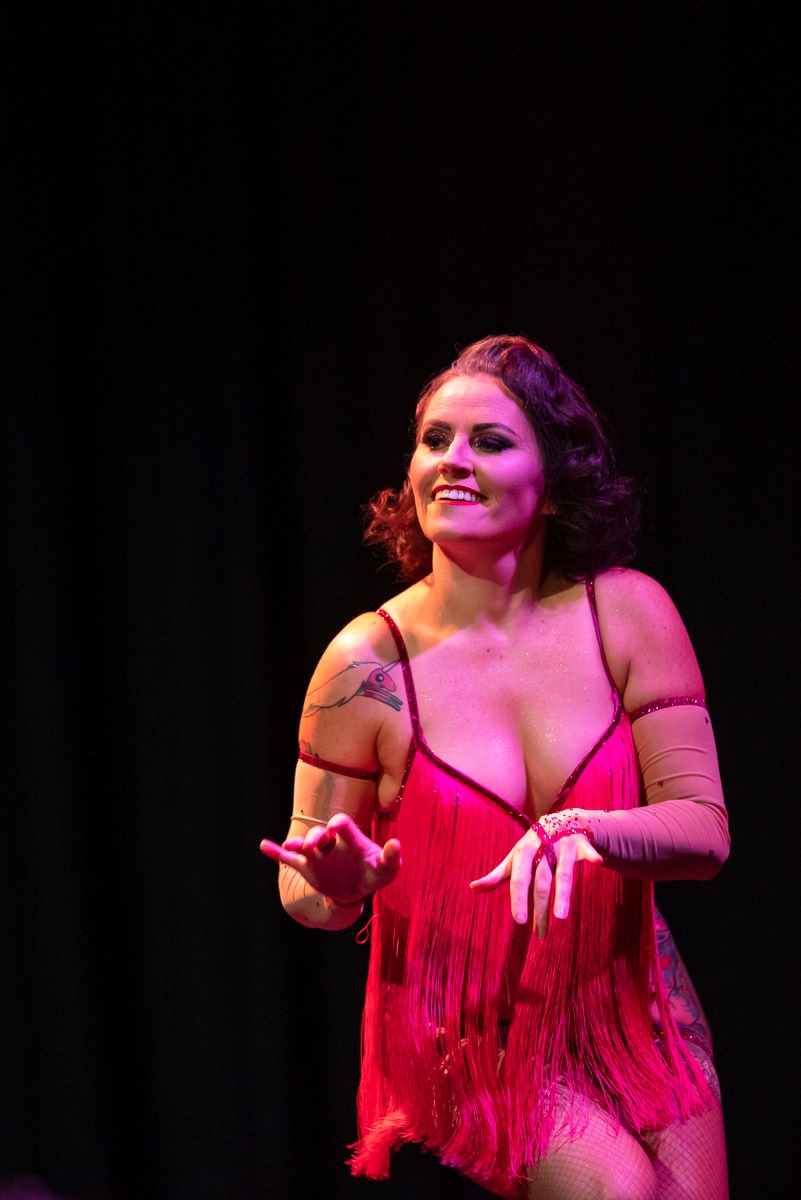 Miss Jessy G, brought a sweeping entrance of dazzling colour and flowing silks, her movement and dancing on pointe as she flirted with the crowd in every glance. She left  the stage in her unique act with whipped cream in place of pasties, a nod to the sixties and the brazen fashion it birthed.

The Vivacious Vixen, Vermillion Rose, stole the hearts of the  audience as she twirled front and centre in a hat that could shade the world from the spotlight pointed at her. Her eye for colour was undeniable and her costumes gleamed as she performed. Her dazzling costumes didn’t outshine her or her ability to grab every person’s eye and toy with them! 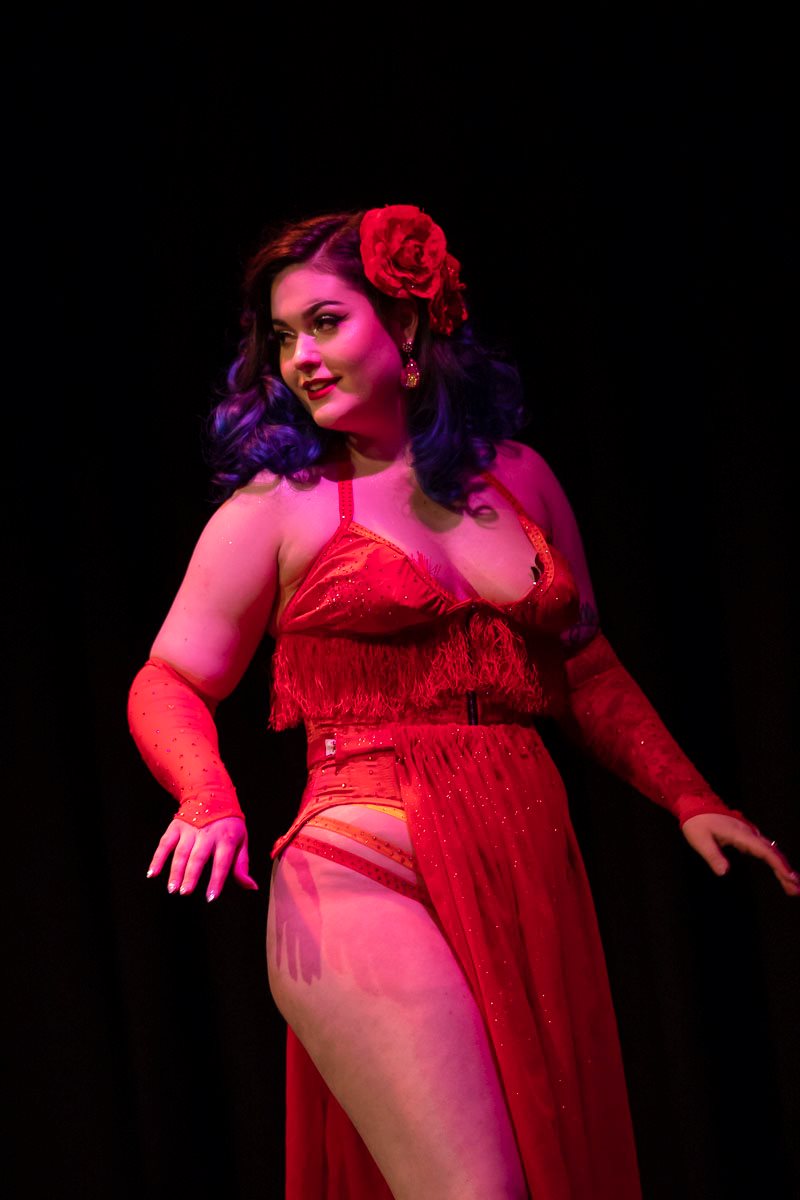 Whispers lit up the ears of the audience and soft comments bounced through the theatre throughout the evening. The whispers filled with the most passion were for Shaan Valentine. When her foot touched the red carpet it was home, her ensemble complete with parasol that resembled a cherry tree in blossom, with steps and twirls that enforced the feeling of spring, blowing through the theatre. Spring turned to Summer in her unique act, filled with reds and fire, along with lingerie that sent a powerful and needed message to the world, “My pussy my rules!” She kept the audience cheering, laughing, and applauding as her heel left the stage. But it would not be for the last time.

Tensions were high during the interval. As more bubbles were poured, the audience chattered, discussing how the performance scene has evolved and changed in Tasmania over the years. Comments about when they first saw which performer, how much people had grown and changed. Inspiration flickered through the eyes of many audience members, picking up flyers for class, some mentioning how they were ready to start practicing at home for their partner.

As the audience returned to their seats after intermission, you could feel the wave of empowerment rush amidst the whistling, screaming, cheers, laughter, whoops and even those cheeky little heckles! Then silence descended, as the time came close for the winner to be announced. 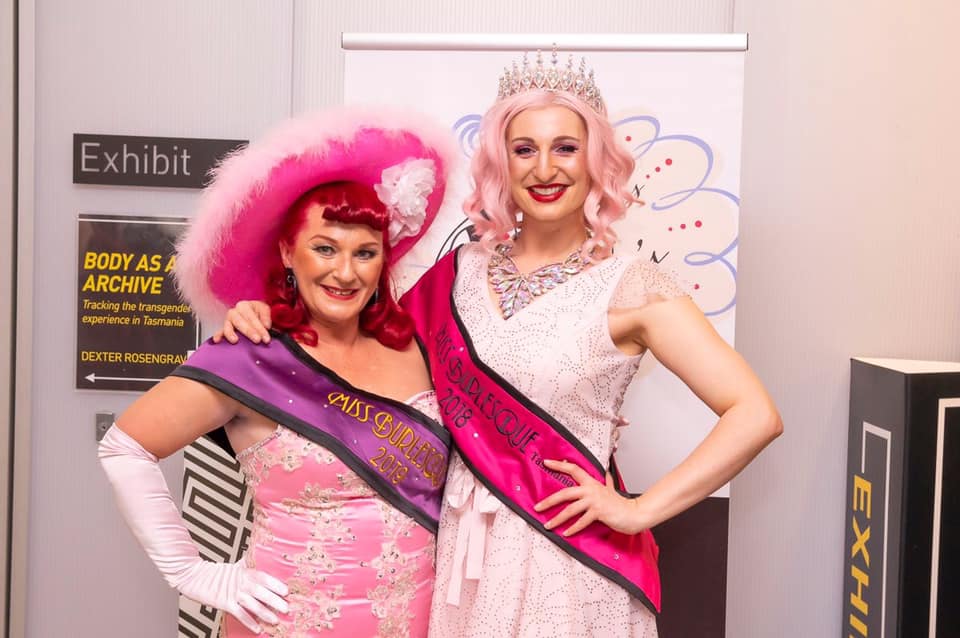 But before they could announce the winning performer, we needed to see the reigning Miss Burlesque Tasmania, Camilla Cream, take to the stage one more time for her handover routine. With a French mood and a flourish of feathered fans, Camilla grabbed the audiences hearts and refused to let go until they were cheering for more. Not often do heroines pierce through the stage’s forth wall and give you an intimate hug with a single look, but Camilla made each person’s dream come true, and broke their hopes all in the same moment. With a kiss to the crowds and cheering a stamping, Camilla left our lives as quickly as she had entered them, preparing to pass on the MBT crown to a new performer.

The crowd fell to an excited hush, after they had roared each member of the competition back to the stage. The emcee clutched the two red envelopes that held the decision of the judges. Before the name of the runner-up was announced the audience and judges stamped their feet on the ground in a drum roll, then the emcee declared Vermillion Rose as Miss Burlesque Hobart for 2019! She accepted the crimson sash with excitement and tears of joy. 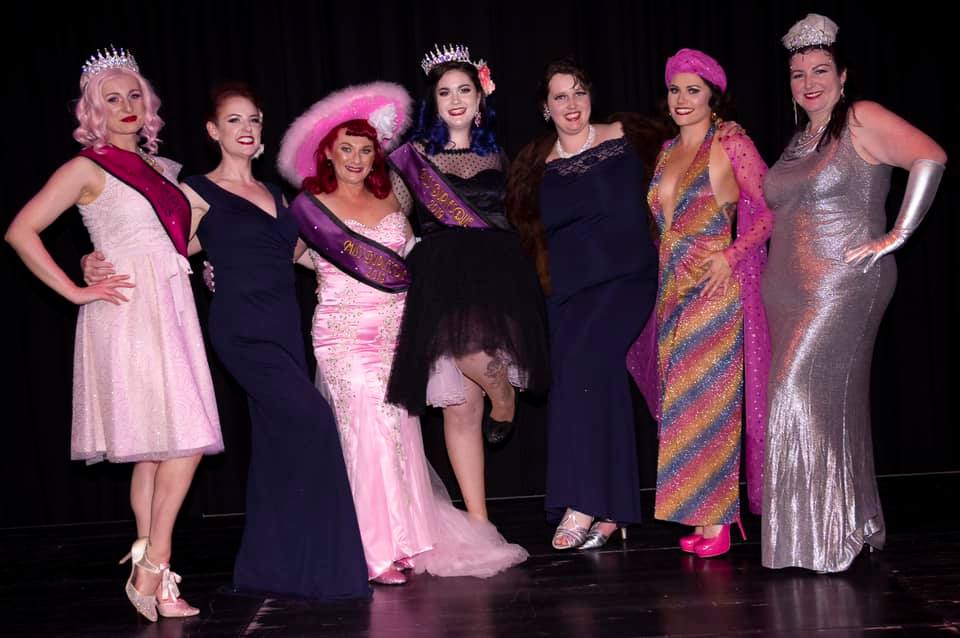 The performers on the podium at the end of the evening with producer, Grace Cherry and Miss Burlesque TAS 2018, Camilla Cream.

The emcee opened the winning envelope and the crowd stamped their feet in a bashing cacophony of sound as it was declared that Shaan Valentine was the winner of Miss Burlesque Tasmania 2019! The sash and crown placed upon Shaan’s radiant head and she beamed with pride. Tasmania, too, is proud to see her represent this tiny little island at the bottom of Australia at the top end of tease for the Miss Burlesque Australia Grand Final in Perth in August. 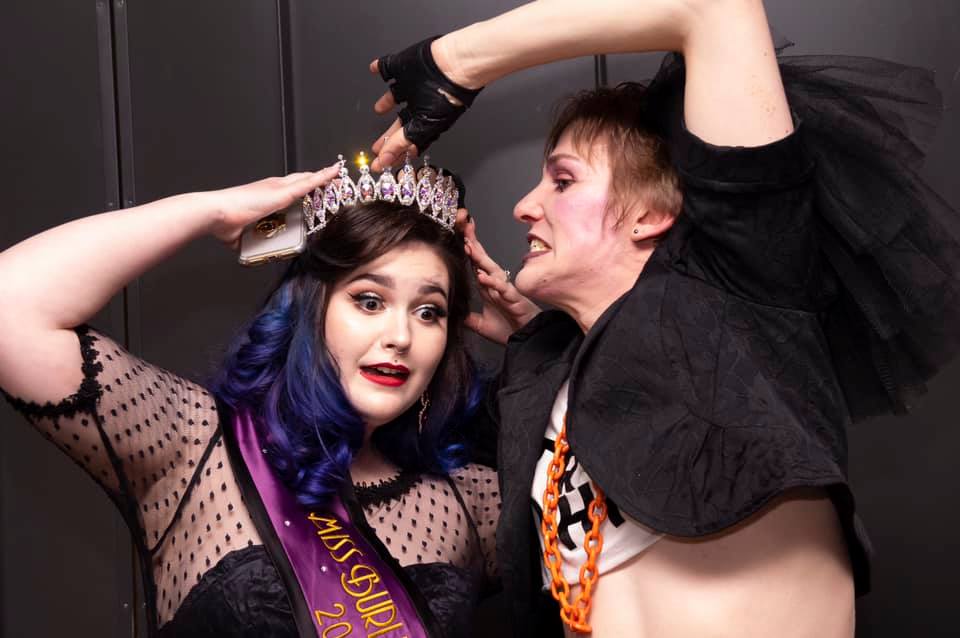 Mx Burlesque Australia is launched in 2022!